In continuity with the 5000 track, and consistently with the value of RESPECT, Modern Tahtib brings the needed platform for propagation in Egypt and beyond. With the appropriate transmission mechanism and pedagogy, it aims at the urban societies, men and women, all around the world.

Among the transmission method, the Tashkila (forms) brings the necessary techniques, footwork, lures and attitudes to develop safe and committed free combat.

During about seven years, the MT founder investigated and practiced with local experts in the Upper-Egypt tahtib spots. Thus he identified the Tashkilas’ elements. Each Tashkila is played in five different modes converging into free combat.

The fifth mode takes place in a circle where A player executes a given Tashkila sequence, not the architecture, against two attackers. His challenge is the timing, transforming a defense into an attack and vice versa. 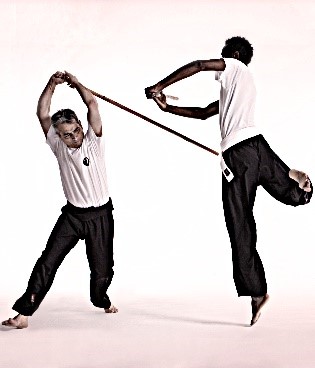 Discover our playlist of Forms and Codified Series